What boxing taught me about unconditional love and confidence 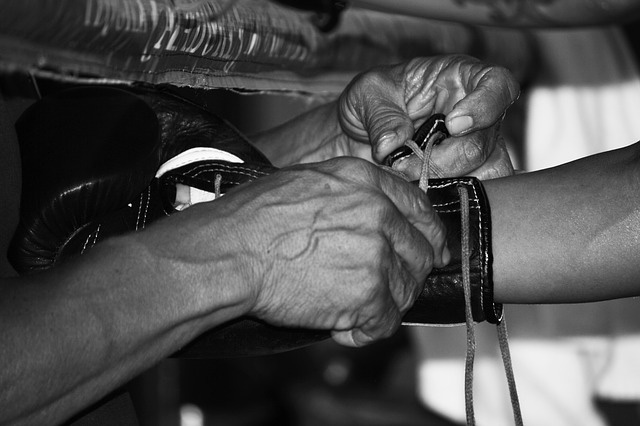 Boxing found its way into my life when I had hit rock bottom emotionally, physically and financially. I had just lost my closest friend to a tragic accident, graduated with my master’s degree during the housing crises in New York and was living in Harlem on food stamps. I was desperately looking for employment when I met Al, who told me that I had a boxers skull and that we could make some money boxing. He had an elaborate plan; we would build up my confidence and skill set by fighting in Asia because they do not keep records, we would then come back to the USA and try to go pro. For a few months, he trained me to fight and helped me to pay my rent. He was quite strict and would make me do one thousand jabs a day.

During this period, I started dating my now ex-husband, D. Al, told me that champions don’t fall in love and because of that he could no longer train me.

I was beginning to appreciate the physical and mental challenges that came along with boxing. So, I decided to find a gym that would train me for a reasonable amount. That was when I met Darryl Pierre at Kingsway Boxing gym in Chelsea. He took me in and taught me all day every day. This was a difficult task for Darryl because I was unfit and unskilled. He was patient, pushed me through fear, and built my confidence. Daryl made me feel like a champion, and he never gave up on me.

A few months into training with Daryl, D asked me if we should move to Hong Kong with his work. Though we had not been dating for long, I took it as an opportunity to start over in a new environment. We decided to get married so that I could work while we were in Hong Kong. At this point, I was waiting tables and bartending in New York. The only thing that I had to look forward to during that period was boxing. I cried when I had to leave Daryl and move to Hong Kong.

The first thing I did when I arrived in Hong Kong was to find a boxing gym. I had visited a few; the gyms were closed down or falling apart. Then I came across Impakt MMA. I walked into the gym, and the owner, Alain Ngalani, a world champion kickboxer smiled at me from ear to ear. His smile said, welcome to my gym and to my family.  I knew right then that is where I belonged. I told Alain that I wanted to be an amateur boxer and he took it seriously. Alain introduced me to a Thai trainer named Ekapol who had had over 300 professional Muay Thai fights. Alain and Ekapol were not there to make me feel good; they were there to kick my ass and get me fit.

Alain told me that there was going to be a white-collar charity fight that was to take place and that I was going to fight in it. I was intimidated. I was drinking too much, eating bad food and my cardio was horrible. Alain pushed my fitness levels until at the end of every day I thought I was going to die. I would go home with every muscle and bone aching. My face felt continually swollen. Alain would not let me give up.

Two weeks before the fight, Ekapol asked me to find another trainer. That’s when I met David Hergault. He would be my trainer for six years and twelve fights. It was during these six years of training with David and Alain that I learned what unconditional love was. As an ex-Mormon, I was used to being judged, shamed and having love be very conditional. Alain and David stood by me and told me they would help me with whatever I needed.

Alain and David went all in with me for every fight, win, lose or draw. They have seen me bleed, vomit and sweat, and it was always ok. David and Alain saw me fight my way through my divorce, my PhD, and poverty. During my divorce, David said, “I don’t care what you’re going through. When you are in the gym, you train, and you focus.” These were the words that made me realise that staying in the moment and focusing on what needs to be done makes you a more resilient person. If you are not focused and in the moment in boxing, you will get hurt.

After my losses, David would be upset with me because I wasn’t living up to my potential. He could see that I was losing because I wasn’t confident and because I didn’t believe in myself. He saw something in me that I could not yet see in myself. He wanted me to fight more so that I was comfortable in the ring. Alain saw my struggle and tried to build me up, pushing me through every intense workout and hugging me when I cried. I would cry after every loss, every time I felt that I disappointed David and Alain. I didn’t want to disappoint them because I felt that they were the two who always believed in me.

Along the way, I met strong women who would spar with me. Push my emotional and mental abilities. I would take a big hit and want to kill them. In boxing, this is dangerous. In boxing, every time you get mad or scared, you waste energy. When you are angry, you make mistakes. A turning point came when one of my sparring partners introduced me to her trainer Paul Logan. It was Paul who taught me to keep my cool, to respond and not react. He taught me that fighting is more than aggression and being tough, you also have to be calm and in control. Paul taught me how to meditate so that I could become more in tune with my body and emotions. He told me that temper was giving into your three-year-old. Paul created a safe space for me to embrace my dark side and become a calmer person and fighter.

The more I trained, the more I fell in love with boxing. And the more I fought, the more confident I became. The more confident I grew, the harder my fights were. That’s when I met Sandy Lam, the best female boxer in Hong Kong. I was set to compete with her at one point. David wanted me to go for it, but I could tell that he was nervous about it. He would make me run 20 sprints, and then run with him up hills in Hong Kong. I would lie on the floor sweating and dying after every session. The competition for me to compete with Sandy was cancelled right before the date, but we became sparring partners after that. Every time she kicked my ass, I became tougher and more skilled. It was moments like these that I realized that you have to push yourself beyond what you believe you can do to get where you need to be.

I will forever be thankful for the people who have helped me along my boxing journey to become more confident, resilient and to understand the meaning of unconditional love. In boxing, it doesn’t matter how educated you are, how wealthy you are or how well dressed you are. What counts is that you show up and put in the work. Every man is equal in the ring.

If you would like to set up an appointment please contact me on +852 2521 4668 or email m.borschel@mindnlife.com. You can book a private or Skype session.